In this interview, Brad Crabtree presented his thoughts on the restructured purpose of his department, current legislation and its implications for the energy sector, as well as his office's top priorities over the next decade.

We invite you to read the full interview below.

ED: Your department, the Office of Fossil Energy and Carbon Management, has a broad remit responsible for carbon mitigation. How are those projects progressing and, with everything going on in Europe, have the priorities changed at all?

BC: The Office of Fossil Energy and Carbon Management has the traditional “fossil energy” portfolio of the Department of Energy and the federal government, but at the beginning of this administration, it was expanded to include carbon management.

The reason is that the work of the federal government in supporting technologies involving fossil fuels now focuses less on producing fossil fuels and more on managing the environmental and other climate-related impacts of continued production and use of fossil fuels.

So with respect to the natural gas industry, this includes things like mitigation of methane emissions of the natural gas supply chain. Or in oil and gas production, managing the produced water that's associated often with oil and gas production. Also, capturing and managing CO2 emissions from not only fossil energy production and use, but also industrial processes. Those are areas that we're investing a great deal in.

Take cement production, for example. Cement production produces a lot of CO2 that comes from the chemistry of the actual cement-making process, not the use of energy while making cement. And so we have a carbon management program that works with carbon capture, for the transport of the CO2 that's captured, the permanent geologic storage of that CO2, and in some instances, transforming those CO2 emissions, which are essentially a waste product, and turning them into valuable products like low carbon fuels, chemicals, building materials, etc. That's really the revolutionary part of our carbon management portfolio.

And then the final piece, which is growing rapidly in importance, is what we call carbon removal. This is not just straight avoiding emissions, but actually removing CO2 we’ve historically already put in the atmosphere. So things like direct air capture technologies – that's carbon management.

The third part is critical minerals. That's the newest portion of the portfolio. Almost anything that we want to build in this new clean energy industrial economy requires critical minerals and rare earth elements to manufacture them.

ED: In your new role as assistant secretary, what areas will you be personally focused on in 2023?

BC: This is a very important moment in the United States. For the first time in decades, we have enacted major legislation in Congress: the infrastructure bill a year ago and the Inflation Reduction Act in August. Between those two pieces of legislation, there are tens of billions of dollars in federal funding available for the demonstration and deployment of key technologies we need, energy infrastructure, and then there are hundreds of millions of dollars in clean energy and industrial tax credits that will attract private capital to invest in these projects. For me, priority number one in my role is making sure that we implement these two pieces of legislation, the Infrastructure bill, and the Inflation Reduction Act, effectively.

There are policies in this legislation that should benefit the entire country across multiple industries. It's really important that when, let's say 10 years from now, we look back and see critical technologies across our economy have been deployed. And the infrastructure that we need, for example, to capture and manage CO2 emissions or methane or all these different infrastructure issues, transporting energy, etc. all these things – we’re making those [critical] investments that position us ultimately, to get to our goal of a net-zero economy by 2050. We basically have three decades to do that, so we definitely have to make progress there. That's priority number one.

Priority number two is actually the development of a sustainable natural gas strategy and policy in the federal government. Sustainable, both in the economic and the environmental sense. So some things that we're talking about at this event are really critical there.

We have the programs and the funding and the different tools right now in the federal government to develop and support that kind of policy. But we need to knit it all together so that we’re positioning our natural gas sector for economic competitiveness in the future and meeting the emissions reduction commitments that are so important.

And then the third focus [in my role] is critical minerals. And so I'm going to spend a lot of time working with our team, making sure that we're building out our capabilities to both produce more of these essential minerals here at home, but also to process them here at home and to build partnerships with other countries that can also supply our market, because obviously, we can't meet all of our needs for these critical minerals just here at home.

We can't remain so dependent on China. We have to develop partnerships around the world with other countries. The involvement in partnership with the private sector is critical in what we do.

The United States has been a global leader in technology innovation in the energy sector. We've been slow in some respects on some of the policy development, but on the actual investing of public resources into innovating and reducing the costs of key technologies, we have an impressive track record going back decades. That will and must continue.

The infrastructure bill I mentioned earlier provides $62 billion over five years to the Department of Energy and it’s [distributed] across technologies. Just in the area of the office that I oversee, $12 billion over five years will be invested in carbon management. All of that funding will be co-invested with the private sector. And that's a key indicator of both interest and potential success of a project: is the private sector willing to participate with the government in supporting it?

ED: In your office, is collaboration with industry expected? What does that look like now, and how do you see it evolving in the future?

BC: Looking ahead, I see [private/public collaborations] increasing because of the scale of resources. When you bring in the tax credits from the Inflation Reduction Act, that means there's going to be a lot more private capital flowing into the same projects, so that is all private sector as well. We’ll see in the next few years, I believe, a real transformation in project development and deployment in the United States because of the federal and the private sector dollars coming together.

The other area that's been talked about a bit at this conference, which is really important is that, in order to meet our climate goals, (for example, the goal of net-zero emissions by 2050, which is a goal of the Biden administration), across our economy, we need to decarbonize U.S. natural gas supply chain. That doesn't mean that we stop using natural gas, it means that we capture and manage the emissions that we are emitting, and that we find ways to use natural gas where we're not continuing to release CO2 into the atmosphere.

We [also] need to measure that decarbonization. Whether it's other companies that are purchasing U.S. gas from overseas, foreign governments that are looking to the United States as a natural gas supplier, or its investors that are thinking about investing in particular projects or somewhere in the supply chain, they all want to know, “What is the emissions footprint of natural gas coming from particular places?” So that's an area where I see a lot of work between the Department of Energy and the private sector, and others outside of government to come up with a framework that has credibility for measuring the greenhouse gas intensity of the natural gas that we're producing and exporting.

To learn more about the North American Gas Forum, we invite you to visit our website. You can find more content and perspectives from gas leaders and policymakers who attended the 2022 conference on the Energy Dialogues Collaborative – become a member FREE today! 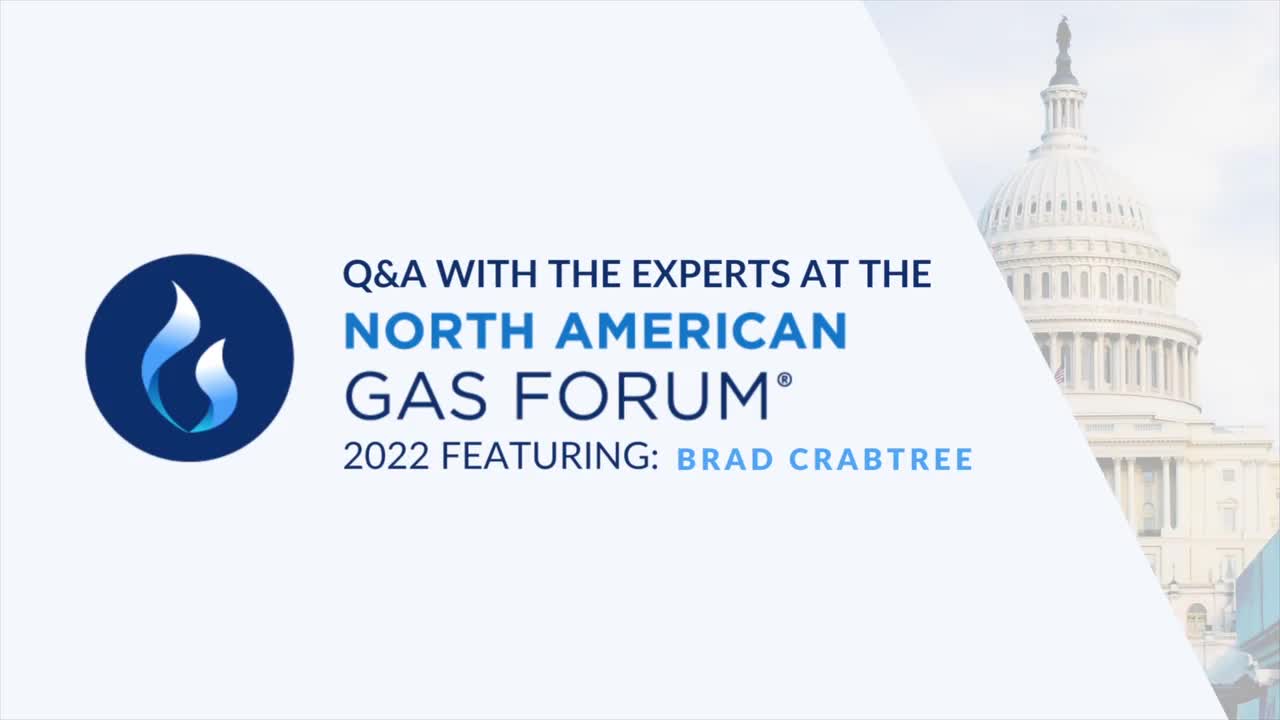 At the North American Gas Forum, we sat for a brief interview with Brad Crabtree, Assistant Secretary for the Office of Fossil Energy and Carbon Management at the Department of Energy (DOE).